HELP! I've fallen and can't get up! Down and helpless on the Washington coast 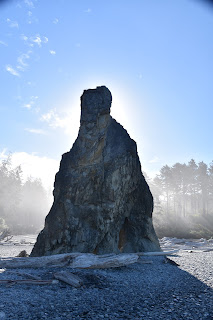 Once I started to see more clearly after slipping between a few huge driftwood logs on Ruby Beach in far northwestern Olympic National Park, I felt my head to see if there were any knots or bumps from slamming my head on one of the logs. I finally sat up as a woman passing nearby moved my way asking, "Are you OK?"

Sitting there feeling around for my glasses I said, "Not sure, but I think so." I found my glasses sans one lens. "Crap," I said feeling around for something smooth and shiny among the rocks and stones. Finding the missing lens and popping it back in place I could finally both see and focus on my situation. I made some motion to try and push myself up to sit on one of the logs, and found that my right foot was just laying there, still attached of course, but angled sharply to the right.  It didn't take any of my 26 years of EMS first responder experience as a retired Des Plaines, IL firefighter to know my ankle was broken, and badly. Revelation number two sunk in then, with the realization that I was stuck on a beach 2000 miles from home near the furthest northwestern point in the continental US, 40 or so miles from any medical help, and no cell service at all. Zero bars, once just an inconvenience, became extra scary to this clumsy near 70 year old stranded and crippled on the log strewn shore.

The woman who saw me fall, I learned, was a young woman visiting from Ireland. As she sat and stayed with me also finding her cell phone of no use, a young couple came over from another direction, asking if they could help. I said yes, I'll need to contact 911 or the Park Service and pointed to my ankle. Trying not to wince, the couple realized my situation was severe immediately. The young man took off up the path to the parking area seeking assistance as his girlfriend occupied another log, literally becoming one of two helpful and watchful bookends keeping me company as we waited for help.

Over the next 45 minutes or so, the young man returned twice to check me out and returned to the lot watching for help to arrive. Finally, I saw the telltale EMS t-shirts on two men and one woman carrying medical bags and equipment. They were EMS workers attached to the Forks Community Hospital some 40 miles away, and immediately began checking me out from head to toe, gathering vital signs and doing a comprehensive survey of my condition.

I identified myself as a retired firefighter and that I'd done a self survey as well, to which they politely acknowledged but continued to professionally do their own anyway. Soon they expertly removed my shoe -- carefully without cutting the laces since I told them they were brand new shoes I bought to help calm my wife's concerns about me tripping or falling somewhere -- and splinted my leg from thigh down in an inflatable splint. Then the wait began as more National Park Rangers were called for to assist moving me from the beach and up the winding and climbing pathway to the waiting ambulance in the parking area where I had left my small van-sized RV.

After about an hours' wait — the National Park covers a lot of territory in the Olympic Penninsula — several more Rangers arrived and I was transported via a large single wheel attached to a basket in sort of an oversized wheelbarrow with 3 or more rescuers on ether side. After a 40 mile trip north back to the EMS crews' home base to Forks Community Hospital in Forks, WA, I was finally wheeled into the emergency room where I was examined, x-rayed and treated by the most friendly, professional and sincerely caring ER staff and Doctors I'd ever encountered. Sure, I was probably expecting a more industrial-type, assembly line experience like some more busy and overloaded ER's I've seen over my EMS years, but the up to date and current facility was matched by all the personnel I encountered. It was not the "Mayberry Clinic" I expected, though the kind, sympathetic and friendly treatment was almost idyllic.

Slowly, as I was scheduled for surgery that evening, panic began to arise as I considered my plight: So far from home, traveling alone, having just been told I'd probably need 6 weeks or so until I could even think of driving.  I had a sizable investment in a modern and well equipped 2015 Roadtrek 170V RV van sitting alone in a lot 40 miles south still at Ruby Beach and no plan or idea of how I would get myself, much less my RV, back home to Wisconsin. I finally made the inevitable call home to my wife who, up til now, figured I was happily still taking photos along the west coast.

I won't go into a detailed account of the conversation, but I made the call, assuring her I was in good hands and receiving excellent care. I would call her after surgery, still several hours away, and the surgeon assured that he would also call her once surgery was done. I began my wait for the trip to the OR as I was prepped and situated for the reduction and surgery that would follow.

"Is there any way I can secure my RV down there at Ruby Beach?" I asked the admitting doctor in the ER.  He pointed to a fellow standing in the doorway.  "A couple of guys from Maintenance said they'd be happy to help," said the Doctor. I handed over the keys to a friendly middle-aged guy who assured me he knew where the lot was at the beach and that two of them would head out now and bring it back and leave it secure in the hospital lot. When he returned the key just before surgery, they both refused any kind of payment. "Just wanted to help out," they said, adding ten-fold to my faith in mankind overall.  I was overwhelmed by their help and effort, and then my cellphone rang.

My wife had called my oldest son in Dallas, Texas area where he works as an ER Nurse at a hospital in Plano, TX.  "Your son is making arrangements to fly out from Dallas to Seattle, rent a car and drive from the airport to Port Angeles, WA then hop on a bus to the hospital.  He will be there late tomorrow afternoon to drive you and the RV back home."

Over the next several days, my wife and family became my strength and sole support. At that moment, however, for the first time in my adult life, after years of responding to emergencies of others, I felt all the panic start to fade away and my eyes started to tear up for a few transitional and eye-opening moments. Laying there so far away from home, alone, injured and awaiting surgery, I realized that amidst the pain and worry, that I was both the luckiest man in the world and the world's proudest father.

And that Forks, WA rocks!!

Epilogue: Surgery went ok, resulting in a metal plate and a few screws to repair my broken ankle, and was splinted to keep it immobile for my several day trip home for follow up by my own Doctors. My son showed up as promised the next day. What followed were 4 days of a road trip where my son drove the RV all day, then schlepped me in and out of motels and saw to my needs, subtly watching for any signs of difficulties associated with my ankle or surgery.  That trip could be a whole separate story on it's own, but I'm going to keep that within family and selfishly save those warm memories for myself. Oh, and no more solo distant hiking adventures so far away. Ever!
Posted by Rick Ornberg at 11:56 AM
Email ThisBlogThis!Share to TwitterShare to FacebookShare to Pinterest