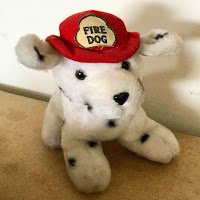 One of the goals of my book, 10-24: A Firefighter Looks Back, was to highlight some of the changes from when I first joined the department to when I retired. This month it’ll be 22 years since I hung up my helmet, and I’ve found that my images of the fire service today are still dominated by those in 1996. A bit dated, I was recently reminded.

It struck me while having a conversation with my son who was an ER nurse in Dallas, now a Doctor of Nurse Practice. We were talking about how TV shows cast an unrealistic image of EMS procedures and challenges. “Like that one medical show showing the seriously injured patient on the bloody gurney in ER and the family members right there within the drawn curtains interrupting and questioning every move,” I said. “Ridiculous,” I added to punctuate my disbelief.

“Actually, Dad, there have been studies showing…” he replied offering a well studied and reasoned approach to improving patient care with some relatives in the ER alcove during treatment. “Hmmmmm,” I said while reeling in my know-it-all, been-there-done-that attitude — at least for this conversation, that is. That’s when I did an updated recount of the date today, and dates back when I was in the trenches. It was now well over two decades since I was on an EMS call.

Monitoring fire service blogs, Twitter feeds and related industry news feeds, I failed in some cases to realize that much of our futuristic equipment predictions, proposed treatment practice improvements and high tech resources are currently in use. What were previously “you know what they oughta do” wishes are now in use saving lives of citizens and first responders as well.

The thing that hasn’t changed in all these years since my first response in 1971, is that stuff changes. And like most things, the good changes survive and are built upon, and the bad changes eventually sentence themselves to obscurity.

And old fire dogs like me continue to watch, judge, pontificate a bit and hopefully learn.

# # #
Posted by Rick Ornberg at 9:48 AM No comments:
Email ThisBlogThis!Share to TwitterShare to FacebookShare to Pinterest
Newer Posts Older Posts Home
Subscribe to: Posts (Atom)