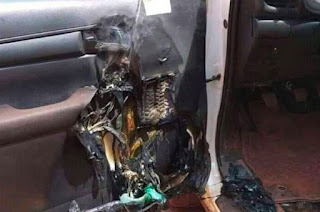 Recently there was a story on the wires concerning a fire department warning of the dangers of sealed bottles of hand sanitizers heating up and exploding inside a vehicle. Many of those carrying the story also included warnings about storing hand sanitizer in cars or RV’s as a result.
Though it sounds logical to most, and for understandable conclusions that flammable products, confined and subjected to high heat can be BAD, the truth is a bit more complicated.
As a source for rapid combustion or explosion the hand sanitizer gets a bad rep. It’s not likely to happen, as internal vehicle temperatures, by one laboratory’s findings, would need to reach over 1,000 degrees F. Just about anything will burst into flames well before that point.
OK, under the universal rule of “@%$& Happens”, it’s possible that an improperly sealed container, however, could potentially leak product thereby releasing flammable fumes that could be subject to ignition from a nearby source, but the same might be argued about some after shave lotions and other products.
If a bottle of hand sanitizer is exposed to flames and subsequently ruptures, shure ‘nuff it will feed a fire with gusto. But then, so would other commonly stored products in an RV packed for travel.
Now that we’re all in a world revolving around copious amounts of hand sanitizer, the best thing would not leave such products in a car or vehicle left in the sun for a long period of time — just in case. If I'm out of my RV when subject to high internal temps, I’ll leave it in a sealed, insulated cooler or — one of the most insulated parts of any vehicle or RV — inside the freezer compartment.
And keep washing my hands, of course.

# # #
Posted by Rick Ornberg at 7:57 AM No comments:
Email ThisBlogThis!Share to TwitterShare to FacebookShare to Pinterest
Newer Posts Older Posts Home
Subscribe to: Posts (Atom)