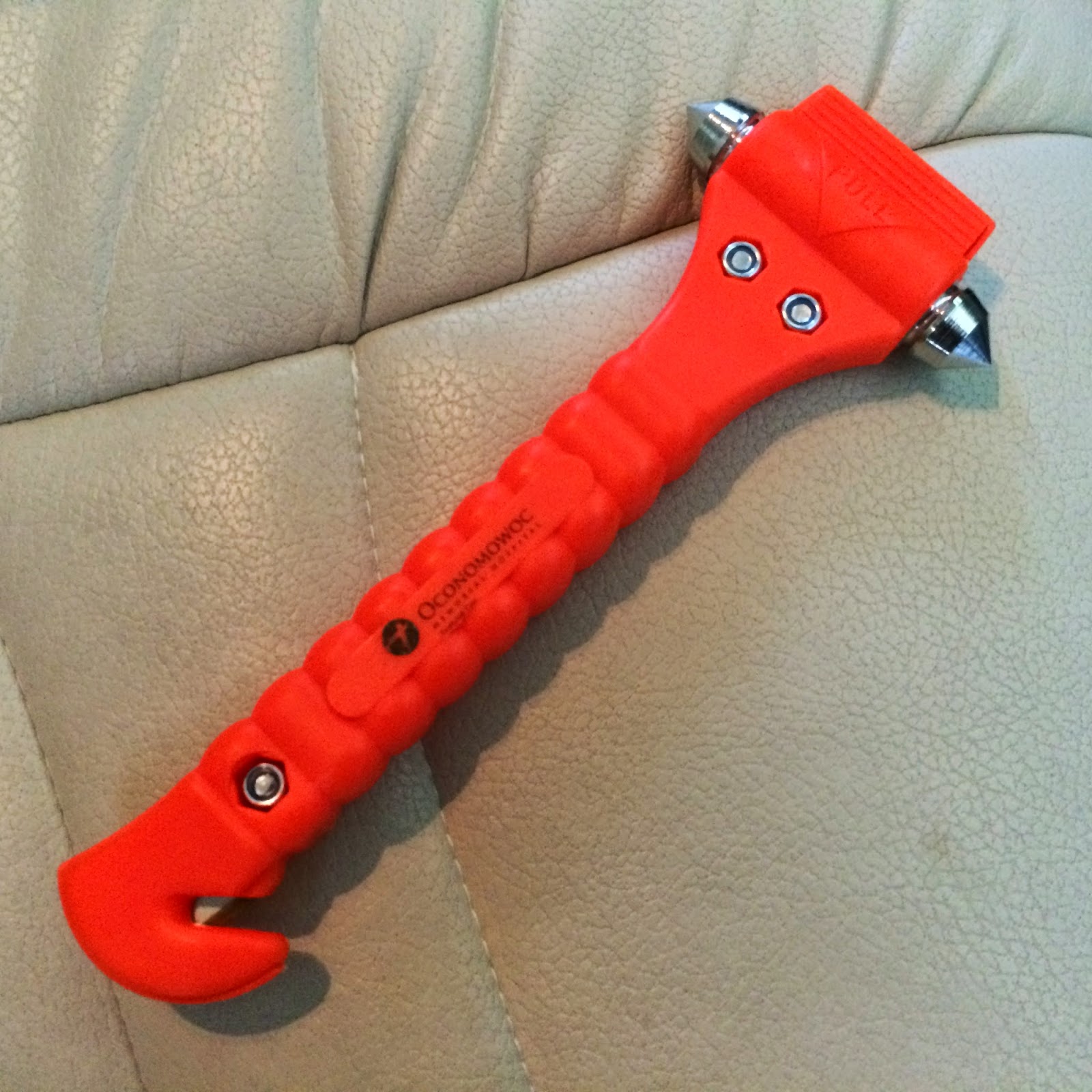 One nightmare scenario involves a vehicle bursting into flames following a crash and the driver or occupant struggling to unlock a seat belt as smoke and flames quickly overcome them. Another is witnessing another driver trapped in a vehicle as you or other would-be samaritans pound and bang unsuccessfully on the window trying to extract an occupant. These nightmares may vary, but they all involve the inability to get out of the vehicle quickly in an emergency.

Properly equipped and trained first responders can often remove an entire windshield in minutes and, if need be, pry open doors or completely remove the vehicle roof with tools commonly known as the “Jaws of Life”. but for the RV'r or or other drivers on the road a simple tool can often be the difference between life or death.

A seat belt cutter and emergency window punch tool sure comes in handy. Readily available at most stores like Walmart or online are a variety of combined belt cutter and window punch tools that can be mounted in plain sight in your vehicle or RV or kept handy in an easily reached compartment. Once in place, it can be quickly accessed either to assist another motorist on the highway or even to help escape your own vehicle when the worst happens.

On one end is a hammer-like head with pointy metal strikers where you’d otherwise expect a flat hammer face for pounding in nails.  This allows even the weakest among us to apply enough focused force on a vehicle window to instantly shatter it into thousands of small pieces and allow access to the occupant, or for the occupant to reach the outside.

The tool is effective only for side windows -- those that offer the best access for either rescue or escape. Modern vehicle front windshields are essentially two safety glass panes of glass sandwiched around an inner plastic like material designed to keep the windshield intact in case it is similarly struck while driving. All modern side windows, however, will shatter with one or two strikes with the tool.

Once the window is no longer an obstacle, potential rescuers may be faced with wasting precious seconds searching for a seat belt release with a variety of release options. With the belt cutter, used in a similar fashion as most letter openers, belts can be quickly sliced. This is a particularly helpful tool with child restraints.

We’ve all seen the online videos of motorists coming to the aid of others on the highway, especially those that have a happy ending.  What we don’t often see, but are the usual outcome too many times, are those where all efforts fail and drivers die while still seated in the vehicle.  In some cases, it could have been merely the difference of a few seconds for either rescuers or occupant, where the right tool in the right place could have made a difference.

Whether you can, or should, help a motorist in such a situation is a decision only you can make. (A subject for another post) If you do choose to act, or wish to give yourself an extra edge -- get one of these tools for every vehicle you drive.

Posted by Rick Ornberg at 12:37 PM
Email ThisBlogThis!Share to TwitterShare to FacebookShare to Pinterest