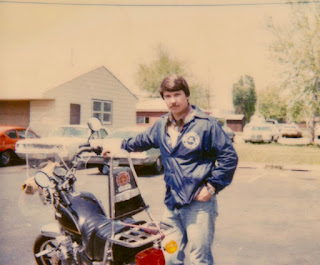 Cruising along the highway with only the high stalks of corn to witness my passage, I looked at the sky and noticed how the clouds seemed to follow overhead, giving no hint of my speed. The Kawasaki 750 LTD hummed smoothly, sending subtle vibrations through my fingers as they lightly held the handlebar grips. The fairing pushed aside the wind and swirled it behind me, where it gently patted my back – seemingly propelling my body in unison with the bike. Tires on the smooth blacktop road made a barely audible hum as I rode.

Leaning back on a small duffle bag, I brought my feet up to the highway pegs and felt as if I were riding on a recliner. The road alternately rose and fell in front of me, with the bike hugging each contour as if on a track. The once gentle curves of the open country began to sharpen a bit, requiring a slower speed as I neared a small town. A small yellow “School Bus” sign signaled the small bit of civilization that lay ahead.

Around a final curve and I was on Main Street. Two pickup trucks and a ‘65 Chevy with a tattered bumper sticker that read, “Drink Milk-The Udder Un-Cola,” occupied the parking spaces in front of a small cafe. I glanced at my reflection in the cafe window as I rode past, and pondered the drifter on the black motorcycle who looked back.

Slowing to 25 mph and glancing down a side street I saw two children look up from their toy earth movers long enough to wave at a stranger passing through town. Well away from the main highways, with no notable tourist attractions nearby, this hamlet rarely saw any visitors. Usually, visitors pass through towns on roads that lead somewhere. This little town marked only a brief interruption in the sea of rolling hills and fields that surrounded it.

In barely the time it took to fully drop my speed for the town, I saw the 55 mph sign that announced the start of the next long stretch of highway. The town disappeared quickly in my mirrors, and the farmhouses grew farther apart as I piloted the bike through banked curves, over slowly rising hills and past old mill ponds.

The sun setting behind me created a long misshapen shadow ahead on the road. Soon, the shadow was replaced by the beam of my headlight as twilight turned to darkness. Reaching the top of a hill, miles from anywhere, I pulled over to the side of the road and killed the engine. Dropping the kickstand and leaning back with a cigarette, I noticed that even though there was no moon, I could still see the shadow of my right hand on the fuel tank. The Milky Way and the constellations were so bright I could have read by their light alone. Listening to the crickets and

frogs, I watched the night sky sporadically light up as meteoric sparklers cut across over my head.

This sky, miles from the nearest street light or neon sign, was much richer than the one I was accustomed to at home. There, the night sky shone with a yellowish-gray light against the silhouette of rooftops visible in every direction. There was no Milky Way at home.

Hearing a distant rumble, I looked to the west and saw a storm, still miles away, lumbering across the landscape on stilts of lightning.

Starting the engine again, and disturbing a small flock of birds, I moved the machine back onto the road and increased my speed. It was time to start heading for home. The night air carried the slight chill of day’s end and quickly shifted my mind back to the realities of home.

I tried to ignore the increasing traffic and decreasing quality of the roads, and thought instead about the next weekend and another brief escape. Pulling into the garage, I sat on the bike for a moment and gave the throttle one more twist in neutral to mark the end of the trip. Turning off the ignition, I listened to the muffled crackling of the engine as it cooled. First the sounds came rapidly, like a metallic popcorn maker. Then they grew further apart and lower in tone, gradually fading away. Even the engine was reluctant to rest.

Stopping at the garage door, I turned and almost projected my thoughts at the now-quiet machine. “Next week,” I thought. “Next week we’ll try another country road.”

Posted by Rick Ornberg at 2:18 PM
Email ThisBlogThis!Share to TwitterShare to FacebookShare to Pinterest