"The Superman Suit" Excerpt from "10-24: A Firefighter Looks Back" 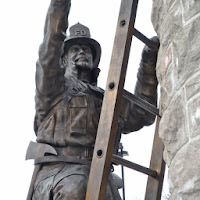 Just before entering a burning building, we’d usually crouch down by the chosen entry point in our full firefighting gear. With thick black smoke belching out of the opening we would pull the air mask over our heads, don the helmet, strap it under our chin, and move in on hands and knees to seek out either the seat of the fire or search for occupants.  Once we were past the early years where air packs were considered "just for wimps" it was simple. No Superman suit, no entry.

A fully equipped firefighter, dressed for entry into a fire, is a striking image. Coupled with the Darth Vader breathing sounds, the image can be downright startling. So much so that a few of us actually appeared on Chicago's Bozo the Clown Show in a segment showing kids the gear and how a firefighter looked and sounded at a fire. The hope was that the kids would see us as helpful friends and not scary monsters and not hide from us as we searched their home.

There was one time, however, when one woman acted as if all the gear was totally invisible.

Working out of our south side Station #2, we responded with an engine to a trouble alarm at a restaurant about 7 blocks down the street.  SOP (Standard Operating Procedure) was that responders wear full firefighting gear until investigating the cause of the alarm. We drove the 7 blocks, lights and siren, donning our coats, air tanks and helmets along the way.

After pulling up in front of the restaurant, and seeing no sign of smoke or problems, the engine officer and I went in the front door to investigate -- each of us in full gear, with air tanks on our backs and helmets on our heads.  Inside the door and about 20 feet down the entry way, we approached the hostess podium, manned by a middle aged woman who, seeing us approach, grabbed two menus and asked,

“Will that be two for lunch?”


(Excerpted from "10-24: A Firefighter Looks Back")
Posted by Rick Ornberg at 2:40 PM
Email ThisBlogThis!Share to TwitterShare to FacebookShare to Pinterest